Poet-members Jim Pignetti and Steve Zeitlin (founder of City Lore) launched brevitas by inviting a variety of poets to share original, short poems (14 lines max) with each other via email on the 1st and 15th of each month. Now, a decade later, this community has grown to over 50 poets. The Festival of the Short Poem is their annual gathering− poems are projected and, books are signed, and literary antics ensue. Laughter, pith and meaning collide.

Tickets: $10.00 (includes a copy of the accompanying printed anthology)

Brownstone Poets presents Karl Roulston and Frank Simone on Tuesday, November 12 at the new time of 7:30 p.m. at Café Dada. Enjoy the Old World ambiance in Park Slope that’s near several subways.  Feast on French-Hungarian cuisine and delectable pastries.  Relax with some wine or beer, a cup of coffee or tea while listening to great poetry. There’s an open mic as well. Poetry does grow in Park Slope, Brooklyn. 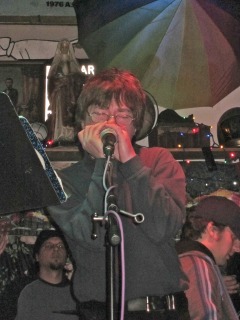 Karl Roulston can be found delivering his words and blowing his blues harp in and around New York City. He appears on the Hydrogen Jukebox “poemusic” CD brain ampin’.  Recent written works have appeared in The Bitter Oleander and the great weather for MEDIA anthologies It’s Animal but Merciful and The Understanding Between Foxes and Light. 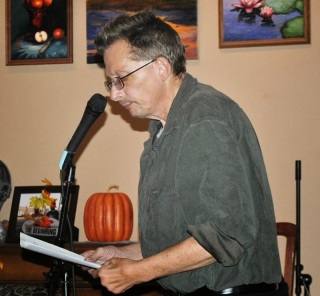 Frank Simone started reading poetry in 1976 at a time when poetry events were held in people’s apartments. Since then he has performed in every venue there is in New York City, plus quite a few in New Jersey. His work has appeared on every media source that can deliver a poem, nationally and internationally—he shies away from listing all the events and publications as he feels he no longer has to confirm to himself that he is a poet.

1- The Weekly Avocet #43, a nature journal, has just published my haiku:

I share “the page” with Juanita Torrence-Thompson, Charles Portolano, and many other fine poets.

2- Four of my Haiku are in The Avocet A Journal of Nature Poetry, Fall 2013 Issue.

a season for change

trees have a mid-life crisis
as the leaves turn red

the sound of drills

Barbara Hantman and Charles Portolano are also in this issue.

4 or 5 to Borough Hall
For more directions:

Patricia Eakins is the author of The Hungry Girls and Other Stories and The Marvelous Adventures of Pierre Baptiste, which won the NYU Press Prize for Fiction and the Capricorn Fiction Award of the Writer’s Voice. Her work has appeared in The Iowa Review, Parnassus, Conjunctions, Fiction International, BigCityLit.com and The Paris Review, which awarded her the Aga Khan Prize. The French translation of The Hungry Girls (by Françoise Palleau-Papin) was recently published by the University of Grenoble Press. Eakins is the judge for the 2013 PEN – New England Fiction Prize and curates Outloud/Uptown, a reading series in northern Manhattan.

Nicholas Johnson is co-founder and editor of Big City Lit, an online literary
magazine (BigCityLit.com). His degrees include a BA from UConn, an MFA in poetry from Brooklyn College, and an ABD from the Catholic University of America. He taught creative writing for many years at the Payne Whitney Clinic and The Lighthouse in New York City. Nick Johnson’s poems have appeared in numerous journals, including Pivot, Rattapallax, The Journal, APR, The Same, Orbis (UK), Poetrybay, The Ledge, Shenandoah and the anthologies Pomegranate Seeds and Chance of a Ghost. His chapbook, Degrees of Freedom, is available from Bright Hill Press.

In 2003, Chad Parenteau self-published his first chapbook, Self-Portrait In Fire (based on his MFA thesis) and won a Cambridge Poetry Award. He appears in numerous print and online publications, including anthologies such as French Connections: A Gathering of Franco-American Poets. He published his third chapbook, Discarded: Poems for My Apartments (Červená Barva Press, 2008). His first full-length collection, Patron Emeritus, was released in June 2013 from FootHills Publishing.  Chad currently hosts and organizes Stone Soup Poetry, one of the longest-running weekly poetry venues in Massachusetts.  Chad creates and edits its online tribute journal, Spoonful, and releases a limited series of print chapbooks currently available through the venue.