Skip to primary content
Brownstone Poets presents Andrew Kaufman and Katrinka Moore on Tuesday, June 18 at 7 p.m. at Café Dada.  Enjoy the Old World ambiance in Park Slope that’s near several subways.  Feast on French-Hungarian cuisine and delectable pastries.  Relax with some wine or beer, a cup of coffee or tea while listening to great poetry. There’s an open mic as well. Poetry does grow in Park Slope, Brooklyn. 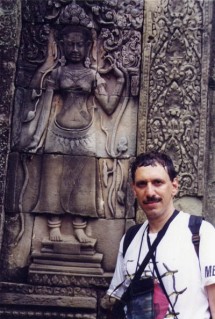 Andrew Kaufman grew up near NYC, graduated from Oberlin College, earned his MFA in poetry writing from Brooklyn College, and his MA and Ph.D. in English Literature from the University of Toronto. His Cinnamon Bay Sonnets won the Center for Book Arts chapbook competition, and was followed by Earth’s Ends, winner of the Pearl Poetry Award. He is the recipient of an NEA award and two Pushcart poetry nominations, and his poems have appeared in numerous journals. He has also published critical work on William Blake, and written for New York Newsday and The Detroit News.  His latest book of poems is Both Sides of the Niger (Spuyten Duyvel Press, 2013). The Cinnamon Bay Poems (Rain Mountain Press) is forthcoming in 2014. He lives in New York City and currently teaches literature at SUNY Purchase.

Katrinka Moore started out as a choreographer and dancer, made a brief foray into performance art, ended up writing poetry, then ventured into making visual poems and collages as well. Recent work appears in MungBeing, Otoliths, and First Literary Review-East. Katrinka is the author of Thief (BlazeVOX, 2009) and This is Not a Story, which won the New Women’s Voices Prize and was published by Finishing Line Press in 2003. She is currently sending out a minimalist epic, Numa, about a shape-shifting creature.